Observers have been warning about the dangers of a bond bubble and what a collapse in such a huge market would mean. Recently, The Economist and many other mainstream publications have become more strident in expressing their prognostications and concerns. See this article from the Asia Times for an example.

Artificially low interest rates (aka free money) coupled with stimulus funds recklessly sloshing to and fro have inflated asset prices all over the globe. However, the most dangerous of these runups is likely the U.S. bond market. Banks, governments, agencies and investors have been borrowing short at close to zero percent interest and buying long bonds yielding 4 %. Just for good measure, anytime the bond market looked a little unsteady, the federal reserve steps in and buys a whole bunch. Sounds like bootstrapping, doesn't it? Anyway, this will need to be unwound sooner or later, just like any other market that has been driven up artificially (like the housing bubble in the U.S., sub-prime, etc.)

The big difference is that the U.S. bond market is very close to the top of the pyramid as far as the world monetary and financial systems are concerned. A failure in this market could crash the U.S. dollar, the world's reserve currency, in addition to crashing government financing capability and markets generally. If you think the sub-prime mess was bad, it would be a walk in the park compared to where a bond crash would take us.

While governments have been been frantically trying to defuse our crisis, they are really playing double or nothing and risking everything, including the very foundations of our financial and economic structures. Heaven help us all.

Doubts about the contents of Fort Knox and other gold repositories surface quite regularly. While certain views might fall into the conspiracy camp, there is a fair amount of circumstantial data to justify some healthy skepticism. GATA and Congressman Ron Paul are among the most vocal in demanding independent audits.

I would categorize doubts surrounding gold in repositories in three ways:

Missing Gold
Since U.S. gold repositories have had no independent audits for decades and since such an audit appears to be hotly resisted, there have been growing doubts as to how much physical gold is actually there.

Fake Gold
Reports circulated in October of 2009 that the Chinese had received a shipment of gold bars which, when tested using invasive techniques (drilling), were found to consist of gold-plated tungsten. I have not been able to find any mainstream news source to confirm this story. Another story detailing fake bars from the Ethiopian central bank is well-documented here.

Borrowed (lent out) Gold
This may be the more probable situation and would similarly explain the resistance to an independent audit. There has been plenty of speculation that while there is still gold in U.S. repositories, much of it has been lent out in the form of swaps or leases to the likes of JPMorgan Chase. Any such gold would thus be encumbered and not owned by the Treasury or Federal Reserve.
Posted by Unknown at 5:37 PM

Ron Paul is a very active congressman who fights monetary fraud and lack of transparency in U.S. financial government operations, especially of the the federal reserve and the Treasury. He fears for the future of the U.S. with its unsustainable and immoral economic and monetary policies.

Ron Paul is one of only a handful of U.S. congressmen who has the internal fortitude and ability to say the hard truths about America and who tirelessly fights to change the misguided direction America has taken financially, economically and militarily. 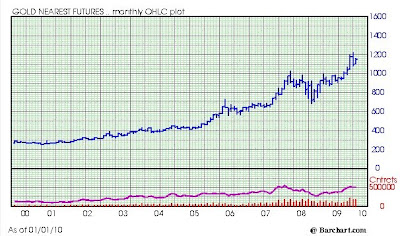 The 2008 financial crisis brought about some major initiatives from governments around the world, notably the U.S. and Britain, which basically embarked upon a program to borrow and print their way out of debt while the culprits and fraud artists continued to ply their trades. The result has been a new round of asset bubbles in the stock market and increased manipulations of all sorts by the Wall Street fraudsters. Currencies of the worst offenders (US and UK) are taking it on the chin but almost all currencies are being debased to some degree.
Despite the steady stream of encouraging results that are being given play, many in the world community continue to be alarmed as evidenced by the steadily rising gold price, which is now rising against virtually all currencies. Some of the biggest sellers of gold over the last 10 -20 years include Canada and the UK. It is sad that Canada sold virtually all of its official gold reserves during the last 20 years. From 500 tons in 1989 only 3 tons were left by 2003. So now we have less than Bangladesh, Iraq, Guatemala and Serbia. We sold most of it for around $300 to buy "interest-earning $US". I could say a lot more about this scam but I'll leave it for later.
The chart depicts the gold price in $US over the last 10 years or so. It is self-explanatory. So who, outside of investors and speculators, have been the big buyers? China, Russia, Belarus, Venezuela, India, Poland, Romania are a few.
Who are the biggest holders? The U.S. (if you believe that they haven't sold or loaned out most of it. Even some in the U.S. Congress don't believe it and have been trying to have an audit of Fort Knox without success), France Germany and Italy.
The rising gold price suggests that lots of folks are very worried and puts a lie to the notion that all is under control. I hope the worry turns out to be unwarranted but I personally cannot see how borrowing and printing can solve anything except possibly to temporarily put off the day of reckoning but at the cost of an even more impaired overall situation.
For more commentary on the US$ see my Markets page at: http://goldsilverstocks.info
Posted by Unknown at 9:02 PM

Not surprisingly, Gold and Silver are resuming their uptrends. Today's release of Federal Reserve minutes continues to support the view that low interest rates and expansionist money supply policy will continue. The precious metals seem to be on their way after a near month-long correction. See here for charts: http://goldsilverstocks.info
Posted by Unknown at 4:21 PM

The looming tragedy of America

As 2010 begins, the tragedy of the decline of America and betrayal of its founders looms larger. An excellent article by Darryl Robert Schoon describes it all so eloquently and painfully here.
Posted by Unknown at 1:24 PM

Economically and monetarily speaking, the Western world, particularly the has been in trouble for a long time. We've had a series of rolling crises which have been masked or papered over by the Federal Reserve, the U.S. Treasury, Wall Street and the Central Banks of the world, all in an attempt to keep the party going.

The bailouts have increased the problem of moral hazard. At the moment we are in a bailout phony money phase with artificially low interest rates, rising commodity and stock prices. watch out for the big bond bubble ahead along with many other problems most likely manifesting themselves in 2010.

For more see: http://bondbubble.info
Posted by Unknown at 9:31 AM