The world financial and securities trading systems are increasingly being characterized by massive interventions and manipulations. If governments or government agencies are doing it, it's called "intervention". Coupled with rising fear and uncertainty regarding the stability of the world's financial systems, this has resulted in increasingly chaotic and volatile market conditions with wildly gyrating markets.

Unfortunately, again, none of these interventions and bailouts address the root causes of the problems which include debt, fraud and mismanagement on a broad scale across most nations. We continue to fight the symptoms and to attack the markets themselves in a form of shoot-the-messenger syndrome.

While much breast-thumping continues from world capitals about new regulations governing banks and market players, existing rules are not being enforced. Governments themselves openly break their own rules that were established for good reason in the first place.

My advice to retail investors: Stay away! You cannot compete with governments and hedge funds with massive resources and instant computerized trading capability creating an increasingly frenetic and schizophrenic marketplace. I get the feeling that a series of collapses will occur in a number of markets because everything is so artificial with normal markets pushed, pulled, constrained or strangled. Free markets are basically gone for the time being. Governments are the worst offenders in all this, beginning with the so-called zero-interest policy (ZIRP) which robs the world's middle-class savers who can either toss the dice in the increasingly casino-like stock and bond markets or park their savings in cash to take a loss after taxes and inflation.

The beneficiaries of most of these ill-conceived policies, on the other hand, comprise the irresponsible, incompetent and fraudulent. It seems clear to me that only a major collapse in a number of markets would finally force governments to their senses. Sad.
Posted by Unknown at 9:05 AM

Bailouts not the solution to too much debt

Bailouts have now proceeded from the corporate, securities, banking and insurance sectors to the sovereign nation/state and even to regional sovereign blocks (EU). None of this has addressed the basic problem of rising debt. In fact, the bailouts are almost certainly just making things much worse.

We tend to get confused because we think that different rules somehow apply than those with which we are more familiar, such as bringing up our own kids. In the past, if our teenagers got into debt, we would probably have had a little chat with them about the potential dangers of debt. If they ignored our advice and got into debt further and got beyond their ability to service that debt, they might show up on our doorstep and ask for a bailout. Some of us might choose to help out, but only if the kids handed over their credit cards for shredding and agreed to a balanced or surplus budget regime. In other words, they would have to live within their means. At the same time, they would be told that if this happened again they would be on their own.

Now let's compare this with what we are doing in the financial world. We are telling nations that we will bail them out if they tighten up a bit and run smaller deficits (increase their outstanding mortgages at a slower rate). And even that is  a lot of hogwash, coming from the "parent" states who themselves are running deficits. So it's like telling your children not to keep borrowing faster than you are. The only thing temporarily keeping things afloat is that people still have some (misplaced) confidence in the parent states (like the U.S.). When you look at the skyrocketing deficits and growing debts of the U.S., it is sheer lunacy but this is where we have come.

Getting back to the parenting analogy, the big risk of these uncontrolled and spreading bailouts is that the kids are going to take the parents down with them. So instead of a relatively nasty and uncomfortable but small and containable default, we are risking the entire financial structure.

The only solution to too much debt is less debt, not more debt!
Posted by Unknown at 10:36 AM

European Bailout in need of a Bailout

The much-heralded European $ 1 Trillion bailout seems to have largely fizzled. The Euro is trading at well below its value in US$ before the bailout announcement on Sunday. Also, Gold has hit an all-time record in many currencies. Things are getting more and more unsteady. When will the world learn that bailing out irresponsible banks, corporations or nations is not the answer and threatens a far worse global collapse as we are pledging more and more collateral in this exponentially expanding poker game.

So you think Greece is a deadbeat?

Before some of us get too haughty and pompous, it might be good to take a look at some of the structural deficit figures published by the IMF in their April, 2010 WEO update. I've charted some of these figures for ease of digestion:
Well, the worst of them all is the good old U.S.A. Ireland and the U.K look pretty sick, too. So, in addition to the oft-quoted and currently focused upon Greece, we have the oft-quoted Portugal, Spain and Ireland and sometimes U.K. and then the rarely mentioned but worst offender - the U.S. 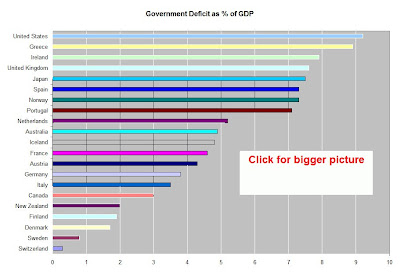 In the minds of goldbugs and a few economists (mostly of the Austrian school) gold has always been viewed as money rather than an ordinary commodity. Interestingly, Alan Greenspan was also an advocate of the gold standard at the beginning of his career.

But today may mark the day when many others have come to believe that gold is not only a safe-haven in times of turmoil but also a viable currency, one that cannot be debased at the whim of a central banker. While the world has been flocking to the $US to escape the ravages of the plummeting Euro, it has also been rushing into gold. Today's action was very telling. The US dollar rose smartly against almost all currencies and yet gold rose in US dollars by 30$ an ounce. And this on a day when most commodities, such as oil, tumbled.

The world is slowly losing faith in all currencies, it seems. Even the US$ is viewed by many in comparison with other currencies as merely the equivalent of the nicest house in a street full of crack houses - a relative and temporary refuge at best.
Posted by Unknown at 9:14 PM

Email ThisBlogThis!Share to TwitterShare to FacebookShare to Pinterest
Labels: Gold

The markets are showing signs of volatility and instability again. Don't pay attention to the American spin about a typo causing the problems. Well before the alleged typo at 2:30PM EST, the Asian and European markets were all over the place, oil was down sharply and gold was up in spite of amazing US dollar strength. The Canadian dollar was down 4 cents before trimming losses to 3 cents for the day. I won't even get into ballooning CDS spreads on European sovereign debt. Oh, and look at the Euro, courtesy of Zerohedge. These are all signs of markets in disarray.

The world's central bankers have a lot of tigers by the tails and things seem to be coming unglued once again. The potential Greek default is only one scene in the show. Massive debt worldwide, private and sovereign, combined with huge leverage, derivatives, bubbles created by artificially cheap money and years of lies and manipulation are slowly backing the banksters and their obliging central banks into a tighter and tighter corner. However, lest you think that they won't find a temporary way out yet again, please remember something I learned many years ago - "A politician up a tree is a very resourceful creature". It applies equally well to central bank governors and especially Wall Street. These folks have managed to put off the day of reckoning many times already. Can they do it again?
Posted by Unknown at 8:25 PM

Toronto's Globe and Mail newspaper had a good article today by Gwyn Morgan on the costs of the Greek and other bailouts to taxpayers of various countries and, more importantly, the link between bailouts and Moral Hazard, which engenders a cycle of even greater financial promiscuity and then more bailouts.
Posted by Unknown at 7:52 PM