The Next Financial Crisis

Many observers are predicting further banking and financial crises and collapses. Why? Well, the 2008-2009 collapse did little to cleanse the world's sovereign debt and fiscal deterioration or to correct banking and financial system excesses. We have kicked the proverbial can down the road. Beneath it all most indicators continue to atrophy. Sovereign debt keeps on rising and personal indebtedness across most countries is doing the same. The back-stops provided by the Federal Reserve, the European Central Bank, Bank of Japan and myriads of others along with increasingly ingenious albeit contrived rescue schemes have so far managed to prevent another, worse, collapse. The latest "solution" for America is in the realm of the surreal - a trillion dollar platinum coin that even the esteemed? Paul Krugman seems to endorse.
Attention of markets and the media have careened back and forth between Europe, China, Japan, the U.S., and the Middle East. Sometimes the focus is energy (as in oil), sometimes concern about the future of the EU or the breathtaking public debt in Japan or the insolvency of U.S. States or the U.S. itself. It seems that markets and media alike get tired of focusing on any one issue or part of the world for any length of time. Nothing has really changed in the European financial situation, for example. In fact everything continues to deteriorate. Yet bond yields have dropped for Spanish, Greek, Portuguese and other European debt. The focus has shifted once again away from Europe and back to the U.S., perhaps in part due to the mind-numbing pounding on the U.S.  fiscal cliff and the U.S. debt ceiling.
So, where is the next financial breakdown going to occur? Nobody knows, but I am going to focus on a potential U.S. flashpoint - U.S. Treasuries and Bonds.
In a previous post, I discussed a chart that was relevant to foreign holders of 30 Year U.S. T-bonds. The chart depicts the value of T-Bonds, corrected for the value of the US dollar, by incorporating the widely quoted U.S. dollar index. So, in other words, it shows how well a typical foreigner's investment in such bonds is doing after cashing in and converting to his home currency of Euros or Japanese Yen, or whatever. In my previous post I observed that foreign investors were doing very well indeed. But look at the chart today: 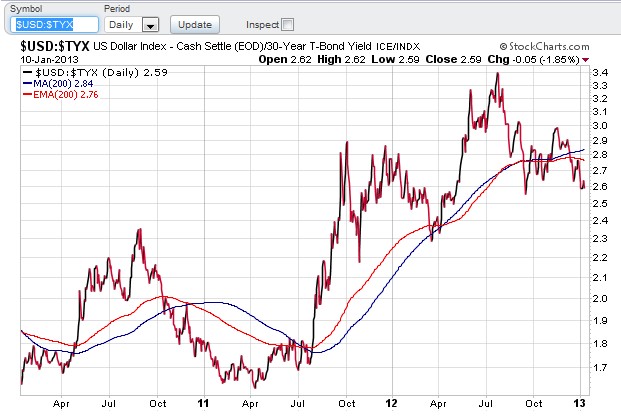 Are bondholders getting nervous? If they are and if they stampede to the exits to finally dump U.S. bonds, it will precipitate a major crisis for the U.S. and the world. The $US will go into a tailspin. The Federal Reserve will need to buy all bonds presented for redemption with freshly created dollars. Sellers will then convert their U.S. dollar proceeds into . . . what? Other currencies? Stocks? Gold, Silver? What do you think? Keep an eye on the above chart, updated by stockcharts.com once a day (evening Canada/US Eastern Time) to gauge the risk and progress of the U.S. bond bubble if indeed it becomes the flashpoint to the next financial crisis.
Posted by Unknown at 1:54 PM