The U.S. has been increasingly funneling money into a broad class of risk assets via the Federal Reserve's POMO and Quantitative Easing actions. POMO's are running 2 to 3 times a week lately. Thus, for example, in spite of continuing  equity fund outflows, stock prices continue strong and bond prices are close to major highs as the Federal Reserve now has purchased and holds about as much in U.S. Treasury Securities as Japan.

Now Japan has announced that it too will get into this game by allowing the Bank of Japan to purchase a broad class of assets, including ETF's.

What a spectacle!  Governments using taxpayers' future money (they are just printing it up for now) to buy mortgage securities, bonds (their own, especially), stocks and derivatives! I'm pretty sure this will all end up very, very badly. And we thought that central state control and manipulation was the preserve of the old Soviet Union and China . . .
Posted by Unknown at 9:42 AM

Sanguine thoughts from the MainStream Media re: Currency Devaluations

It's amazing what is going mainstream. Here is MarketWatch's David Callaway using terms like "Race to the Bottom" in reference to competitive currency devaluations with warnings about conditions that could lead to another depression. Bond bubbles, commodity bubbles, stock market bubbles - I guess it is becoming OK to talk about these things now that the artificiality of rises in these entities is becoming patently obvious to all, while the FED (along with most major Central Banks) desperately tries to keep everything afloat on an increasing sea of liquidity courtesy of modern day printing aka "Quantitative Easing". Gee, until recently, this stuff could only be heard in blogs and "radical" alternative news sites.
Posted by Unknown at 9:17 AM

Federal Reserve Chairman Ben Bernanke made an interesting speech yesterday which got very little attention from the mainstream media. CNN reported a pretty sanitized version. The Times of India was a little more direct. But the EconomicPolicyJournal Blog and other sources cut to the chase and give many more direct quotes. Pretty scary when you read some of Ben`s assessments. Not that we haven't heard a lot of this before, it`s just that the Fed Chairman is now saying it :-)
Posted by Unknown at 12:13 PM

Why can't we just say "Printing" or "creating more dollars"?

This evening, I was just perusing the mainstream media, such as the WSJ, Marketwatch, Globe & Mail, etc.). There are many articles focusing on and worrying about what the Federal Reserve will do next (inflate or not). It seems that the FED has become the principal driver of almost every market now. Anyway, it is truly amazing how they just can't say "printing dollars" or "creating more dollars". Here are some of the terms used instead: boost liquidity, quantitative easing, opening the tap, further easing, monetary expansion. If it's a dirty act, maybe it sounds a little less dirty if couched in sophistry or made into a cool analogy.

I may as well use an analogy as well - watering down the wine! I'd prefer mine full strength, thanks.
Posted by Unknown at 8:58 PM

Why are Commodity prices rising again?

Remember when commodities peaked in mid-2008 just before the financial crisis and then crashed (sort of), along with the stock market? Well, the CRB index, which is a good proxy for commodity prices, is right back to where it was in mid-2008. Yet, take a look at the Baltic Dry Index, which is a good proxy for world economic and trade activity. It is still mired and hasn't recovered. So why is the correlation no longer valid? My take is that commodities are rising in terms of a weakening U.S. Dollar and to a degree, against almost all currencies as a reflection of currency debasement. One of the more obvious examples is Gold, of course. Gold is really the currency of currecies and so far no one has figured out how to easily debase it. You can't print more of it. Quantitative Easing (QE) techniques won't produce more gold, only more dollars. So there you have it. Since it isn't industrial demand that is pushing prices up this time, then according to the CRB basket of commodities, dollars are just fast becoming worth a lot less, that's all. 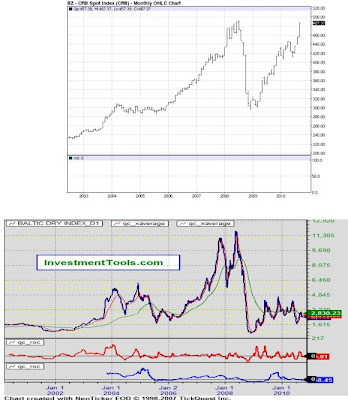