How well are foreign holders of US$ debt doing?

Folks have fretted over the possibility of a huge U.S. bond bubble for a long time. In particular, some have warned that China, in particular, might suddenly begin dumping large amounts of accumulated Treasuries. In fact, China has been dumping US Treasuries and the Federal Reserve has been forced to compensate by printing up the difference (quantitative easing) to a good degree. See here. But so far this exit from the US$ has been controlled. Partly this may be because other major currencies are also having trouble so that the US$ is seen as the best of the worst. Since the 2008 crisis, Central Banks around the world have been pumping - buying their own debt - see here. So, while the US debt infrastructure may slowly be crumbling, a fast look at the recent performance of US$ denominated long-term debt (30 year Treasuries) from the perspective of foreign holders shows that for the time being everything looks pretty good. 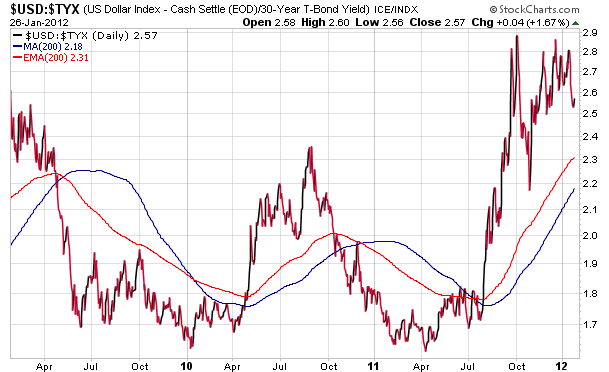 The above chart depicts the performance of 30-Year US Treasury Bonds in terms of the US$ index. Typical foreign holders make money in their own currencies if 1) the US$ rises and 2) the Bonds themselves rise. By charting the US$ index divided by the bond yield, we get an approximation of the combined effects of bond price and US$ price relative to other currencies.

Thus, while many participants may be nervously glancing at the EXIT doors to spot an incipient mass exodus which would precipitate an implosion of the so-called bubble, those exiting now are actually doing very well from an investment perspective. Anyway, the current focus is still on Europe - Greece, Portugal, Italy, etc. But markets will eventually turn to the biggest debtor of them all - the U.S.
Posted by Unknown at 11:03 AM

Backing the U.S. Dollar with Gold

There has been a lot of speculation regarding the resurrection of the gold standard to address a possible crisis of confidence in the U.S. dollar should markets begin to focus on increasing U.S. indebtedness and growing fiscal imbalances. Potentially, this elephant in the room is a lot bigger than the European debt situation. This speculation is partly driven by the very large purported U.S. gold reserves of 8133 metric tonnes or approximately 262 million troy ounces which comprises by far the largest gold holdings of any nation. Could this gold hoard rescue the U.S. from a potential financial catastrophe down the road? Maybe, but only if gold were revalued much, much higher. Some observers suggest that monetary aggregates such as M1, M2 or M3 should be used to determine the price to which gold would need to rise for markets to accept a gold-backed dollar if a crisis of confidence were to occur.  I decided to use figures for the U.S. National Debt instead. More importantly, I wanted to see how the debt of the U.S. compared to its gold reserves historically. 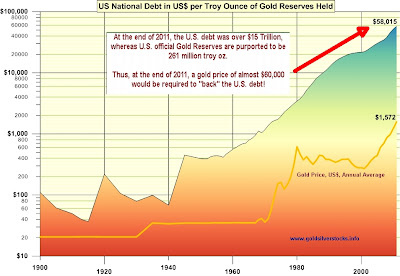 But . . . U.S. debt continues to rise and some have speculated that not all the gold in Fort Knox and elsewhere is there anymore! H'm m m.
Posted by Unknown at 3:50 PM