The Economy according to the Baltic Exchange Dry Index (BDI)

Since I touched upon the topic in October, 2010, of the apparent disconnect between Commodity prices (rising) and the Baltic Exchange Dry Index (falling), the two indexes have continued to diverge. The BDI, as stated before, is normally a good proxy for world trade conditions, since it reflects world shipping demand and price whereas commodity prices normally also correlate well with a strong world economy. My earlier contention was that rising commodity prices were largely reflecting world currency debasement (printing). Since October, 2010, I see nothing to suggest otherwise. The BDI, on the other hand may be influenced by too many ships coming on line, spurred by the previous boom, so it may be a lower than economic conditions alone would dictate. 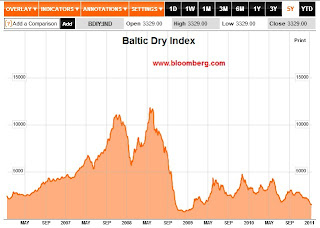 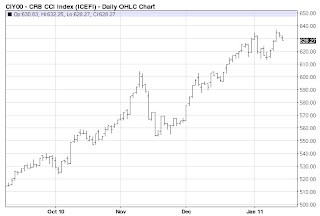