From a long-term perspective, Gold has a pretty good inverse relationship with real interest rates (nominal interest rates minus inflation). The chart below, courtesy of Damien Cleusix (Global Tactical Asset Allocation) depicts this pretty clearly. The last big period of negative real rates began in the mid 1970's and culminated in the huge interest rate hikes of the early 1980's that rescued the dollar and brought down inflation. We are in a similar period now, although nominal rates are a lot lower this time around and so are the (official) inflation rates. At this point it appears that the U.S., as well as most other countries, are still willing to debase their currencies in a hoped-for economic resurgence (doubtful, in my view). In that case, gold and silver still have a long way to go. 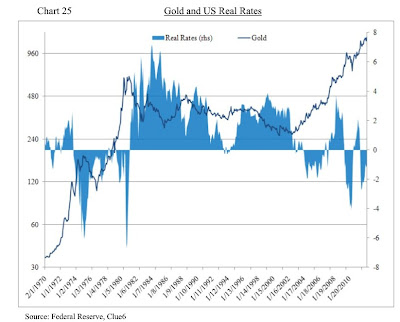 The U.S. is quickly running out of "tools"

After watching the antics of central bankers over the last several weeks, especially the failed attempts of the Japanese and Swiss efforts to bring down the exchange rates of their currencies and the increasingly pathetic attempts of the U.S. Federal Reserve to keep the economy and monetary systems afloat, it seems that there are fewer and fewer tools available to central bankers in the game of resuscitating a terminally ill patient.

Basically, what I see from the U.S. administration is a terrific amount of spin to put the best possible face on any release of economic info, from jobs to industrial production, clever techniques of revising previous months stats lower to make it appear that the current month's info is positive and above all, "quantitative easing", or "printing" by continuing to guarantee bad debt and by buying its own Treasury Bonds. Interest rates are at zero. They can't go lower. Gold is steadily rising and US debt is rising like a rocket. And Ben Bernanke says that he stands ready to print as required.

We are running out of time to arrive at anything resembling an elegant admission that we are living well beyond our means and to take the necessary albeit difficult road to reorient our policies towards far less consumption and far more production. Alas, it seems that we have chosen the futile path of printing and deceit to keep the entrenched system in place, however rotten and however more costly and difficult this will be when it inevitably topples.
Posted by Unknown at 4:17 PM

Books dealing with the 2008-20?? crisis are now sprouting on store shelves. Two opposing schools of thought are exemplified by folks such as Paul Krugman, a Keynesian, on the one hand and Raghuram G. Rajan of the Chicago school, on the other. Paul Krugman's views are expressed in a book entitled The Return of Depression Economics and the Crisis of 2008 (review here) while Raghuram G. Rajan presents his analysis in a book entitled Fault Lines (review here).
I will not mince words. I see Paul Krugman as an apologist for current and past policies that blame everything and everyone else for the crisis, while advocating more of the same but in ever larger doses as a solution. Raghuram G. Rajan, on the other hand, belongs to a group trying to analyze past and present policies to see what went wrong and how to avoid the same mistakes today and in the future. I particularly like his article in the The Journal of the American Enterprise Institute critiquing Paul Krugman's head-in-the-sand views.
Posted by Unknown at 10:04 AM

Puzzled by the acronyms used on many otherwise fine investment blogs and business news sites? I've compiled a list of currently "hot" terms here. Hope this helps you digest some of the excellent articles on sites such as ZeroHedge
Posted by Unknown at 3:11 PM

Email ThisBlogThis!Share to TwitterShare to FacebookShare to Pinterest
Labels: Investment

Some more observations on the Canadian housing situation, mass psychology and illustration of the statistical value of being a contrarian investor - a great article by Ben Rabidoux on his Financial Insights Blog.