Eurobonds - does Gold have a role?

A politician up a tree is a very resourceful creature. Ditto for central bankers! So in this vein, yet another proposal is being trial-ballooned with the aim of saving Euroland from its debt mess while off-loading some of the responsibility from Germany who so far has stridently resisted becoming its one and only financial backstop. The idea is to attract bond purchases and at low rates (similar to Germany's but without Germany becoming the guarantor) by getting European nations to pledge their gold as collateral for these bond issues. It must have been difficult for some of these bankers, finance ministers and heads of state to admit a possible role for that "barbarous" relic, gold.
The problem is that, at current prices, the Euro nations' gold stash is worth "only" about $2.3 Trillion. That just happens to be about the size of Italy's debt alone! So, It might look like a heady sum at first but let's take a look at what the gold price would need to be to back the debt of some of the countries at the centre of the debt fiasco using each nation's stated gold reserves. I've added a few others in for comparison as well. Source data is from the World Gold Council, the World Bank and Eurostat. 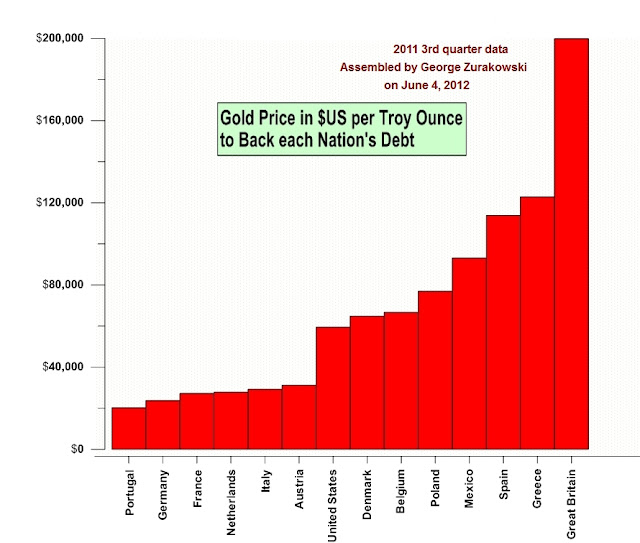 From the chart it is readily apparent that gold prices would need to be between $20,000 and $100,000 per ounce to back the debt of any of these countries. Of course, some of the proposals to date suggest backing only some of each nation's debt (maybe half, say). But on the other hand, some of the gold in the reserves is likely already pledged or leased and therefore "encumbered". Nevertheless, the true scale of the problem becomes evident when even the United States with its supposedly unencumbered gargantuan holdings of  8,133 metric tons of gold would need a $60,000 price per ounce to cover its $15 Trillion debt.
Posted by Unknown at 1:34 PM