China, the Dollar and Sovereign Debt


Quite a few observers are suggesting that China could/will bring the U.S. down by suddenly dumping its dollar-denominated Treasuries and Bonds, thereby creating a mass exodus from the delicately-perched $US, dramatically raising bond yields and thereby interest rates in general, resulting in a global economic crash and a “reset” in currency values and a realignment of world powers. As the second largest holder of $U.S. sovereign debt (the Federal Reserve has now moved into the #1 position), it is certainly plausible for the Chinese to do this. But in my view this scenario, at least as a deliberate action, as opposed to a reaction to some other external trigger, is extremely unlikely. Why would the Chinese rock the boat unless the perceived benefits outweighed the associated costs (such as loss of the remaining value of their $U.S. denominated paper assets, crippling of their export-oriented manufacturing base, etc.)?

However, our financial system is increasingly perched atop an unstable ledge. Interest rates are held artificially low by constant central bank backstopping of sovereign debt in an attempt to keep the economy (and banks!) from collapsing. Remember, bond yields are inversely related to bond prices! The U.S. Federal Reserve, for example is pumping at least $85 Billion a month into Treasuries, bonds and other debt instruments. The resulting super-low-interest rate environment has created a mad scramble for investments that have a higher rate of return than the 1% or 2% available from traditional “safe” investment vehicles. Middle class savers can either join this scramble into increasingly higher-risk ventures or be savaged by returns lower than inflation. Those funding their own retirements are finding that even $2 Million savings earns a paltry $40,000 in annual interest. Meanwhile, stock markets have surged to record highs and sovereign debt yields, even for Italy and Spain, have declined. All this is taking place while outstanding sovereign debt continues to accumulate. The chart below shows the deteriorating European debt situation. 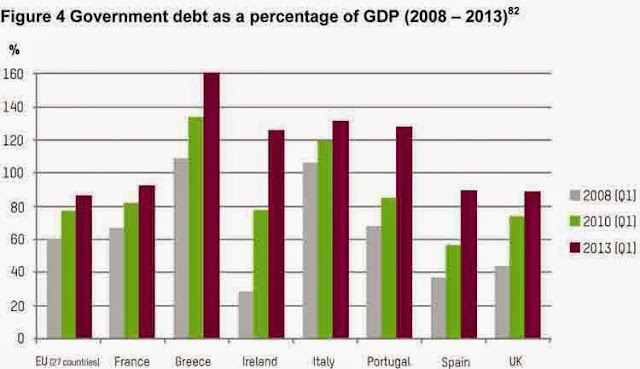 The divergence between the actual situation and the financial pricing of risk in bonds and securities is increasing. As recently as last week, S&P downgraded France's credit rating. Did this cause French bond yields to rise? Of course not. They are stuck at a nice 2.2%. In layman terms, everything is increasingly out of whack in the financial, investment and monetary world. Price discovery is dying. Manipulation of interest rates and other markets is forcing money where money shouldn't be and forcing risk to be mispriced by a large margin. New bubbles are forming.

The Chinese and most everyone else with big money on the table know this but are riding out the trend supported by ever-increasing central bank intervention variously labeled as stimulus, quantitative easing, monetary aggregate adjustment, etc. So the Chinese seem to be preparing for that day, whether they, the Chinese, or some other event triggers a run from sovereign debt and the affected currencies, say, the Euro, the British Pound, the Yen and the $US. They have been purchasing large amounts of gold and entering into increasing numbers of Renminbi/Yuan currency swaps with other nations in an apparent move to initiate the internationalization of their currency as a possible prelude to eventual reserve currency status for their currency.

Perhaps a rapid transition in mind-set is not imminent but some unexpected trigger could cause a rush for the exits at any time. It's really a state of mind as well as a collective assessment of when the end of the rope is reached for central bank printing actions. Most folks know none of this is repayable, after all, and the wiser ones are warily eying the exit doors for signs of  mass exodus. I suspect that the Chinese are in that category. They have too much to lose to be the last ones out the door.