World sentiment and confidence seemed to sag towards the end of 2015 and the trend has accelerated into early 2016 in spite of continuing comforting media headlines and words from world leaders. So what is going on?

Since the great recession (2008-2009), world leaders, the IMF and central banks have taken the road of “whatever it takes” to get the world economy moving again:

The message to markets, firms and ordinary citizens was basically “We’ve got your back”, “Fear not – spend and borrow”. And by and large, that is what most did. Money was almost free. Real estate started to move, autos were purchased, and stock markets ramped up and up. Riskier and riskier debt instruments such as “high-yield” bonds became popular. Indebtedness soared at almost all levels of society: consumers, business and government.

An examination of some of the cheer leading is most amusing: “growth”, “green shoots” and recovery are always just around the corner. Today may be a problem but tomorrow it’s going to be great. The IMF’s successive revisions are a good example. 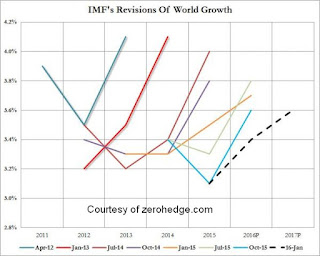 Virtually everyone has been in the game. The worst information manipulator is likely China. Yet, by late 2015, even these statistics started to show some negative trends.
Also, there were many visible signs early on that something was very wrong, at least for those who paid attention to indicators that were difficult to manipulate. By early 2011, for example, world commodity prices were sinking. Why? 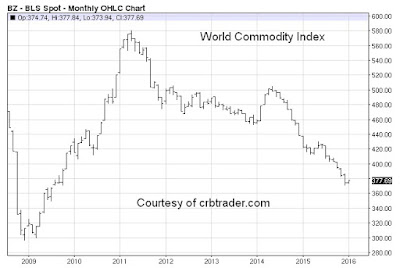 The plummeting price of oil was easy to explain away as a Saudi thing, say,  but what about rice, wheat, copper, nickel, iron, soybeans, sugar, etc? By 2013 even lumber prices had started to decline. This didn’t look like a recovering world economy at all. Yet China, while not growing at the previously torrid rates, was still supposedly exhibiting growth. Really? I was in China in the Spring of 2015 and while their achievements are amazing and construction activity was evident, the number of vacant buildings everywhere also amazed me. China is definitely slowing. 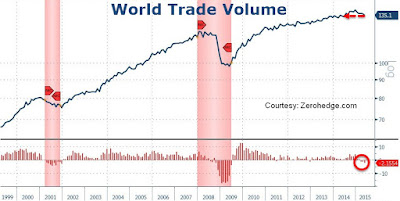 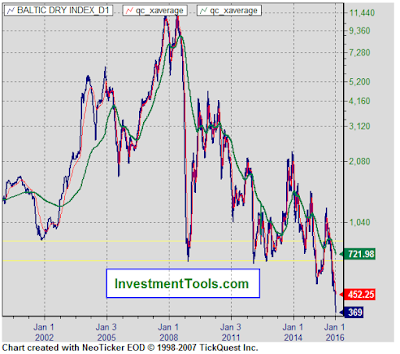 Another indicator related to World Trade is the Baltic Dry Index, a measure of world shipping demand/supply. It has reached levels below that of the “Great Recession” of 2008-2009. 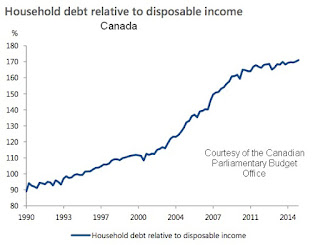 Meanwhile consumers are getting tapped out, even at current low interest rates. Indebtedness is rising almost everywhere.

In Canada, for example, household debt to disposable income has reached 171%. 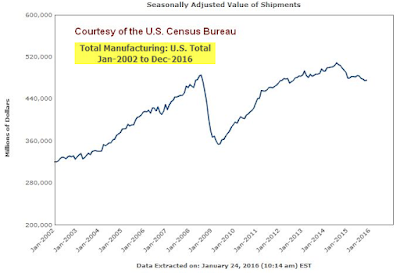 In the U.S., many indicators are contradicting the Cheerleader in Chief (Obama) and the Federal Reserve chiefs. Manufacturing has been slumping and inventories have been rising, for example. 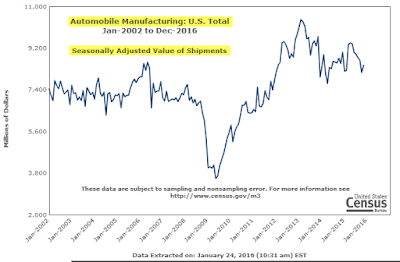 And the much vaunted automobile sector has been spun shamelessly. But look at the U.S. Census Bureau’s own reports. 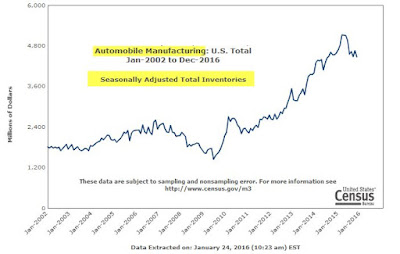 But the actual situation is likely worse still because automobile inventories have been piling up. 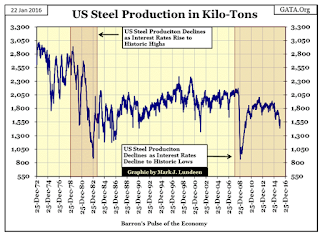 
And then there are new home sales that are sputtering along but even at today’s low mortgage rates, aren’t anywhere near the rate 10 years ago: 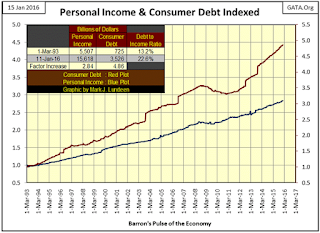 And what about the U.S. consumer? Well, there has been considerable deterioration since mid 2012, with debt to income ratios widening steadily.

Much the same has been repeated around the globe. Trillions in central bank stimulus (printing) by the likes of the Federal Reserve, The People’s Bank of China, the Bank of Japan, The Swiss National Bank, The European Central Bank and the Bank of England have kept economies sputtering along with the bulk of the money going into securities such as stock markets and bonds. It has been wonderful for the banks and financial centres such as Wall Street but not that good for the middle classes around the world. 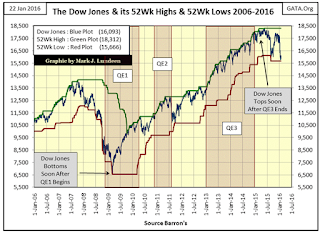 Since the end of the “Quantitative Easing” stimulus period dubbed QE3, things have started to get wobbly in the stock markets again and also in lower quality (high yield) bonds. In some parts of the world, real estate prices have begun to deteriorate sharply.

The continuing decay in commodity prices as well as rising commercial, consumer and government debt loads have also taken their toll.What will the Debt to GDP charts look like if a world recession takes hold? Will any of this be manageable?

Let’s face it; interest rates cannot be lowered much from where they are now, though they may go a bit negative. Governments and Central Banks have almost run out of tools. Another round of distortion creating stimulus may soon be upon us in spite of clear evidence that these measures have at most kicked the problems down the road at the expense of increasing the structural problems that led to the various rounds of stimulus in the first place. We now have much bigger problems than we already had. The scary thing to me is that unlike other periods in history, the world has embarked almost in unison on a coordinated and massive mission to keep economies afloat.
When this crisis finally breaks, it won’t be an Asian crisis or a South American crisis or an emerging economies crisis, it will likely be a world-wide crisis with virtually no major pockets of strength to moderate its effects. In such a scenario, valuations in almost all asset classes including currencies, real estate, stocks, bonds and commodities will change drastically. Financial dislocations and misery will abound. Be on guard!