Everything on the mend or is it Normalcy Bias?

As we wrap up the year, it is fitting to take stock to see where we've been, where we are and what the future might hold. The financial crisis of 2007-2010 has been averted, at least for the time being. Many banks and major institutions have been stabilized, propped up, bailed out or nationalized. Stock markets have largely clawed back from their sickening descents in 2008-2009. The world's leaders together with their central banks have exuded confidence in their ability to prevent disaster - "We will do what is necessary".

But scratching beneath the surface, worrisome signs continue and some new, very scary ones have appeared. While financial institutions have been stabilized, the credit-worthiness of entire nations has been imperiled in the process. As growing national debt in many nations, especially the U.S., has expanded to fund bailouts, chronic deficits and addictive spending habits, many nations have resorted to massive printing to make ends meet and to fund growing intervention in financial markets. Thus, while stock and bond markets, as mentioned earlier, have recovered, who has been buying? Well, the Federal Reserve, directly and indirectly, has massively entered the bond and stock markets. But take a look at mutual fund flows. Ordinary investors have been fleeing. The bond markets are even worse. The Federal Reserve has bought (with printed dollars) over a $Trillion to prop up bonds and keep interest rates low. They have especially tried to keep mortgage rates artificially low to "save" the housing industry as well. But interest rates have now begun to creep up, as many observers are beginning to see the inflationary pressures resulting from reckless currency expansions by the Federal Reserve, ECB and other central banks. Meanwhile, U.S. housing prices have resumed their downtrend. How long can governments artificially prop up markets and consumer spending without unleashing far greater tragedies like hyperinflation?  The commodity markets are sending big flashing warning signals. The chart below provides an idea of what the composite of various commodity prices, be they for hogs, wheat or copper are doing. 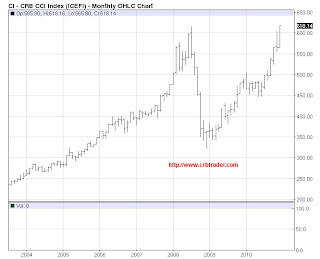 Rising Gold and silver prices, in spite of attempts by governments to manipulate them lower have also continued to flash multi-year warnings that something is not right. 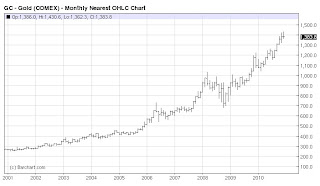 Near-bankruptcies of entire nations are now being "averted" such as for Greece, Ireland, Iceland. Spain, Portugal, Belgium and many others are now on the short-term horizon. Meanwhile, virtually every nation's indebtedness is worsening by the day. Many U.S. States are seeking to avert bankruptcy (California, Illinois and many others). The U.S. financial situation continues to deteriorate in almost every respect - see the U.S. National Debt Clock.

So has the crisis been averted or have we simply kicked the can down the road a bit further and turned the can into a big tank? Are we engaging in classic denial typical of a normalcy bias? Or is there real plausible explanation of how we will be able to muddle through, relatively unscathed? Personally, after looking at what appear to be the facts, I don't think we can escape some very serious consequences of the irresponsible overspending, over-consuming and financial manipulation that has been taking place over the years, in spite of the ever more ingenious and ridiculous "initiatives" taken by our leaders and monetary authorities to put off that day of reckoning. At the same time, judging by the conversations I've had with many folks over the last year or so who seem to be either complacent or entirely unaware of anything amiss, I think that the normalcy bias is definitely alive and well. In spite of that, may I wish you all a Happy and Prosperous 2011!
Posted by Unknown at 11:51 AM